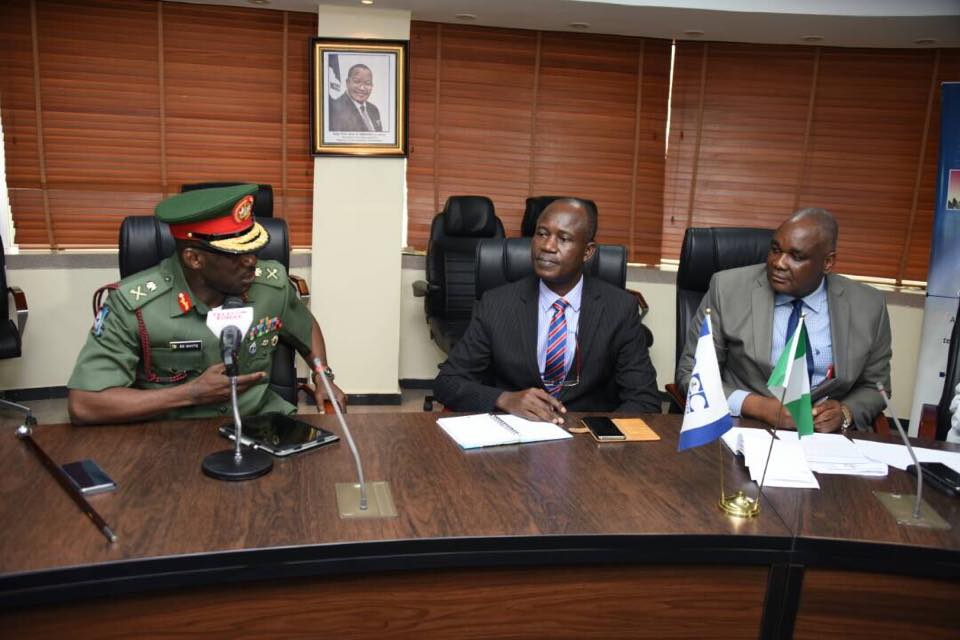 Click to view pictures.
The Director Spectrum Administration, Austin Nwaulune received a delegation from the National Defence Space Administration on behalf of the EVC/CEO of NCC, Professor U.G Danbatta on May 10, 2018.

Major General EG Whyte, Chief of Defence Space Administration of the Federal Defence Space Administration stated in his opening remarks that they have come to establish strategic collaboration and partnership with NCC to help in actualising their mandate of developing and operating military space technologies, support the operations of Nigerian Military within and outside the country as well as security through agencies responsible for internal security by the use of information through the satellite and other surveillance channels. He further stated that monitoring cyberspace and curbing the activities of cyber crimes is also one of their key mandates.

Whyte stated that NCC is one of the most important agencies in Nigeria that they must collaborate with apart from the other agencies whose responsibility is to provide intelligence and security services, to help fulfill their mandate.

He called for collaboration in the areas of helping his agency to have the necessary technical equipment and know how; engage in joint research and development, jointly fight cyber security crimes and tackle problems associated with the wrong use of social media networks which pose great challenge to security, promotes hate speech and violence as has been witnessed in recent times

He also requested that the Commission dedicates a frequency of spectrum for their use and, also get linked to the National satellite in order to access and monitor the activities/ information that passes through the gateway. He also stated that his agency would liaise with the Commission when they want information regarding suspected subscribers lines.

In response, Engineer Austin highlighted that some of those demands are already in place, others are not within the purview of the Commission alone and; stated that one of the 8-Points Agenda of the Commission is to form strategic collaboration and partnership with all relevant agencies for the fulfillment of shared objectives / support the fulfillment of another agency’s objectives for the development of the nation.

Furthermore, the Director Spectrum Administration promised to extend the purpose of their visit to Prof. Danbatta.