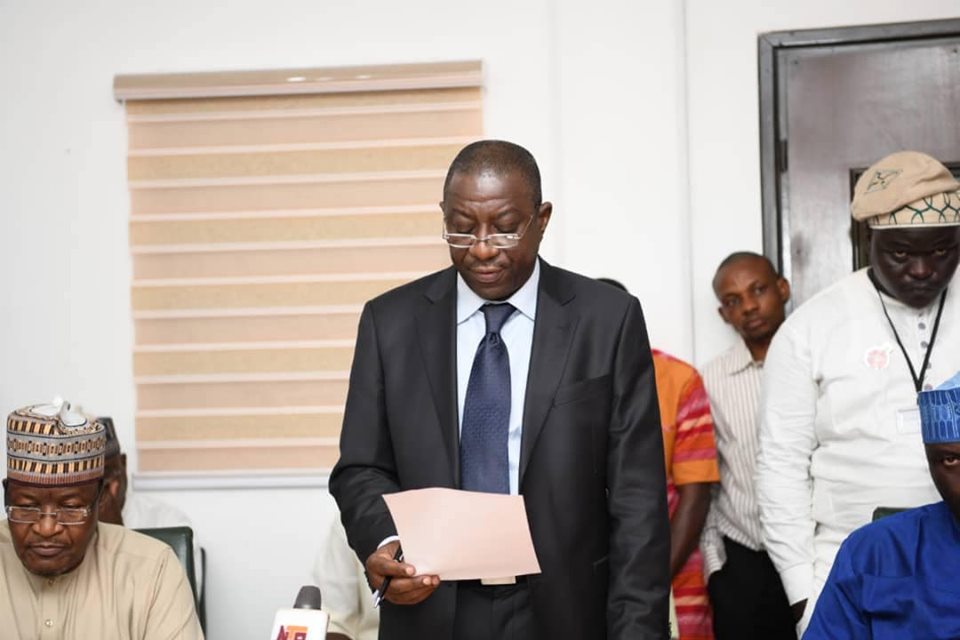 The new Executive Commissioner Stakeholder Management (ECSM) of the Nigerian Communications Commission (NCC), Mr. Adeleke Adewolu, took the oath of office yesterday at the instance of the Minister of Communications and Digital Economy, Dr. Isa Pantami, at the Conference Room of the Ministry.

Minister of Communications and Digital Economy, Dr. Isa Pantami, has commended the efforts of the Nigerian Communications Commission (NCC) in accelerating broadband penetration and curbing cases of invalidly-registered Subscriber Identification Module (SIM) cards in the country.

The NCC team comprising of the Executive Vice Chairman, Prof. Umar Danbatta and other members of the Board and Management, was led to the swearing-in ceremony by the Chairman of NCC Board of Commissioners, Otunba Olabiyi Durojaiye.

Speaking after swearing-in of Adewolu as a member of Board and Management of NCC, Pantami listed issues requiring the attention of the Commission which includes the need to address complaints about data pricing and rate of depletion.

He then urged Adewolu to support the efforts to address that and other issues for the benefits of Nigerians and in line with the vision of President Buhari.

The Minister also commended NCC for its effectiveness in addressing some matters. "I would like to commend the Commission, firstly, for how it has responded to the issue for pre-registered/improperly-registered SIM cards in the country, and secondly, for facilitating broadband penetration in the country,” Pantami said.

Pantami acknowledged that in 2018, the Commission succeeded in achieving and surpassing the national broadband target of 30 percent and has continued to deepen the broadband penetration which is now at 35 percent.

Pantami equally advised the new ECSM to work with the other board members towards achieving the tripartite objectives of President Muhammadu Buhari which are to: curb corruption, enhance security and provide empowerment to Nigerians through job creations.

Earlier, Senator Durojaiye, while formally presenting Adewolu to the Minister, sought more support from the Minister for the Commission towards deepening digital transformation and enhancing the impact of telecoms on the economy.