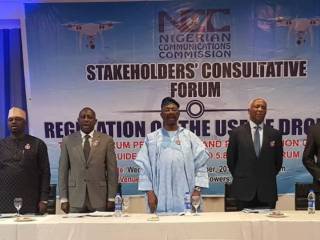 - We'll always be guided by inputs from stakeholders - Danbatta.

The Nigerian Communications Commission (NCC) this morning (18/12/2019) met a medley and rare assemblage of stakeholders, including top echelon of military and paramilitary personnel and key telecom industry players, at a Consultative Forum it organised on regulating the deployment of drones in the country.

At the forum, which took place at the Sheraton Hotel and Towers, Ikeja, Lagos, Otunba Olabiyi Durojaiye, Chairman, NCC Board of Commissioners, assured participants that the Commission will continue to collaborate with all stakeholders concerning the deployment of drones and on all other matters. Durojaiye also used the platform to reiterate his call on the National Assembly to expeditiously pass the Critical National Infrastructure Protection Bill.

The Executive Vice Chairman and CEO of NCC, Prof. Umar Danbatta, who was represented by Adeleke Adewolu, the Executive Commissioner Stakeholder Management, told the participants that in the face of security challenges such as the vandalism of critical national infrastructure, kidnapping, insurgencies and other crimes, the Commission conveyed the forum "to inform our stakeholders of the appropriate spectrum for drones and the conditions for its use in order to help in realising the set objectives of deploying them to tackle the security challenges and for commercial services too".

Danbatta also informed the participants that in view of the limitations to the guidelines for the use of 2.4GHz and 5.8GHz spectrum bands and the need for amendments, a reviewed draft guidelines that accommodate duty cycle, transmission, reception frequencies, power, distance, speed and weight, among others, is now available.

He noted that "these changes will give an added opportunity to the use of drones in the bands without causing interference to the adjacent and incumbent services." Danbatta affirmed that "all equipment to be used must be duly type-approved in accordance with the Commission's Type Approval Regulation. He called on all stakeholders to leverage the opportunity provided by the 60GHz frequency band which exists on 57-64 GHz and now officially available for use once the necessary work is completed on the guidelines.

Austin Nwalunne, NCC's Director of Spectrum Administration, recalled that the forum was a clear expression of NCC's commitment to the ongoing implementation of the NCC's 8-Point Agenda because it speaks to key elements of the Agenda including the optimisation of benefits of spectrum, facilitation of strategic collaboration and partnership, and ensuring operational efficiency and regulatory excellence.

Nwalunne stated that drones have found application in several areas that are contributing to the development of nations, especially in security surveillance, shipping, disaster management, archaeological surveys, geographic mapping, agriculture and many kinds of monitoring as well as law enforcement processes using devices.

The Director of Spectrum Administration said the Commission recognises "a number of challenges in fully realising the potential for growth that drones bring with them, including meeting the spectrum for drones" but NCC "is advancing the administrative standards by establishing technical parameters to use certain bands as the frequency for deployment of drones and other emerging technologies."

The President of the Nigerian Institute of Electrical and Electronic Engineers (NIEEE), Funso Adebayo, who made a visibly passionate remark at the forum, praised the NCC for efforts being made in this regard, describing the Commission as "moving in the right direction and at the right speed."

Among the key presenters at the forum were Alexis Martin of Mansat, UK; Kobus Fourie of Henslodt, South Africa, Dr. James Ajago and Joe Emeshili of NCC. They made presentations on Drones: Definitions and Practices; Harmonisation of Spectrum for Unmanned Aerial Vehicles (UAVs); Emerging Trends; and Guidelines on 2.4GHz & 5.8GHz respectively.

Abraham Oshadami, NCC's Head of Information Technology, moderated the questions and answers sessions during which participants were able to register their approvals, commendations, concerns and challenges as stakeholders. The main session of the forum was moderated by Dr. Fidelis Onah, a telecom and engineering consultant and former Director of Technical Standards and Network Integrity at NCC.