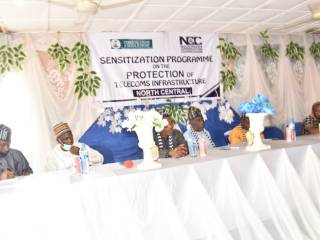 Click to view pictures.
The Nigerian Communications Commission (NCC) has emphasised that telecommunications consumers in Nigeria have a major role to play in complementing efforts being put in place to ensure effective protection of telecommunications infrastructure. This is important to sustain and improve on the quality of service delivery by the service providers.

The Commission made this request and assertion recently at a sensitization programme it organized at Wannune, Tarka Local Government Area of Benue State.

According to the Commission, aside from the role of the law enforcement agencies in protecting telecom infrastructure, the consumers, who are the subscribers and ultimate users of telecom services, have an obligation to do everything to protect telecoms infrastructure in their environment. These include the base transceiver stations (BTS), the underground fibre optic cable, as well as associated infrastructure.

Addressing audience at the programme, the Director, Zonal Operations, NCC, Amina Shehu, decried the problem of vandalism caused to telecom infrastructure which often result in poor quality of service delivery to the end users.

“One of the major challenges to quality of service that operator provide to you, is vandalism of telecom infrastructure, such as Base Transceiver Stations (BTS). Others are theft, hostility from some host communities, which have continued to pose a major setback to the industry. Therefore, it is imperative for the public to regard telecom facilities as collectively-owned infrastructure that are crucial and essential for the provision of efficient and acceptable telecom services. The more reason these facilities need to be adequately protected,” she urged.

While imploring the indigenes of Tarka Local Government Area of Benue State to ensure that they protect telecom facilities in their community, Shehu, who was represented at the event by an Assistant Director, Zonal Operations, NCC, Abubakar Usman, further enjoined the consumers to always alert law enforcement agencies close to them once they suspect any act of vandalism, theft or other suspicious activities directed at telecom infrastructure because such nefarious activities have implications for quality of service delivery in the communities.

Shehu underscored the centrality of telecommunications sector to the economy and she also informed the audience that in the last 15 years, telecom has been a major contributor to the nation’s economic growth and development. The Director Zonal Operations said the Commission will continue to collaborate with relevant agencies and keep sensitising the consumers on their role in ensuring the security of telecom infrastructure.

One issue Shehu discussed in her speech was the misinformation about Electromagnetic Frequency (EMF) radiation emanating from telecommunications infrastructure which she asserted was not harmful according to studies conducted by the International Telecommunication Union (ITU), World Health Organisation (WHO) and the International Commission for Non-Ionising Radiation Protection (ICNIRP).

Shehu stated that the overall objective of the event is to sensitize members of the public on the need to protect telecommunication infrastructure, and more importantly, to correct the misconception people have on the effect of radio magnetic waves on human health. “So, the Commission is saying again to you that there is no scientific evidence yet that shows that radiation from telecom masts constitute health hazards to human and we want you to help spread this information to those that are not here,” she said.

During the event, participants were also enlightened on the illegality of pre-registered Subscriber Identity Module (SIM) cards, the imperatives of proper SIM registration, the importance of National Identification Number,NIN-SIM linkage exercise. The consumers were also informed about facilities provided by the Commission which they can use to improve their telecom experience and quality of life in general. These include the NCC Toll-free Number (622); the 112 National Emergency Number; and the Do-Not-Disturb (DND) 2442 short code for managing cases of unsolicited text messages, amongst others.

Meanwhile, the Paramount Ruler of Wannune, Chief Gandeorun Orokaa, who attended the event, thanked the Commission on behalf of the participants for bringing the sensitization programme to the Community to educate the consumers on sensitive consumer-related issues as well as correcting wrong notions and clarifying misconceptions. He also called on the indigenes to support NCC in protecting telecoms infrastructure so as to ensure that quality of service improves in the areas.

The event ended with an audience session, where questions and answers were asked, and observations and recommendations were also made on many aspects of telecom services. In attendance at the event were Local Government workers, Village Heads, Community leaders, Students, Women leaders, Staff of the Nigeria Security and Civil Defence Corps (NSCDC).