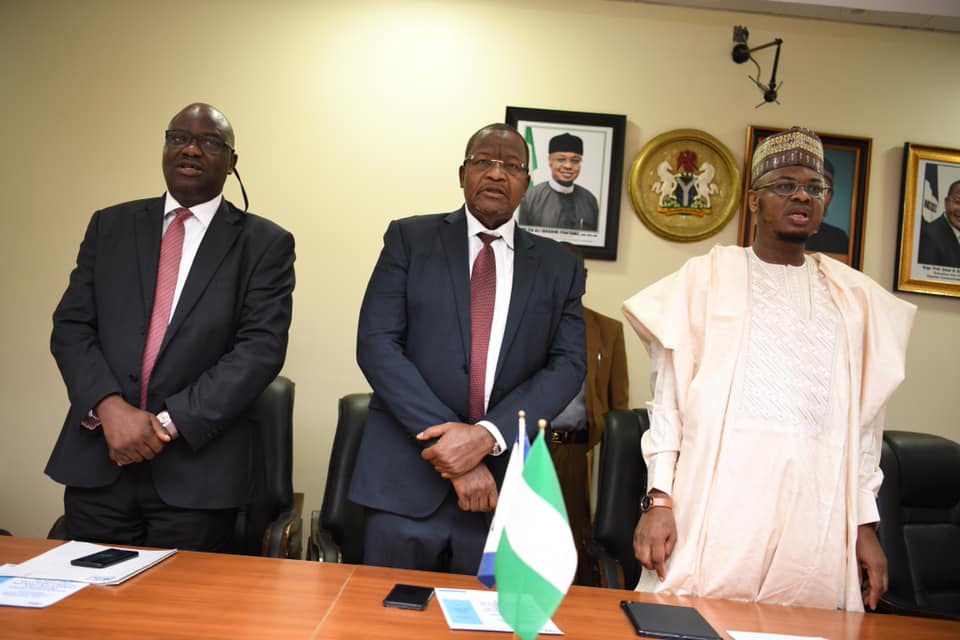 Click to view pictures.
Minister of Communications and Digital Economy, Dr. Isa Ali Ibrahim Pantami, has said that the Television White Space (TVWS) framework being developed by the Nigerian Communications Commission (NCC), under the ministry’s supervision, will enhance the delivery of the digital economy agenda of the Federal Government.

The Minister stated this during the Industry Stakeholder Forum on the Guidelines on the use of TVWS in Nigeria, organised by the Commission at its Head Office in Abuja on Tuesday (17/03/2020).

The programme was attended by several stakeholders, including the representatives of telecoms companies, the Association of Telecommunications Companies of Nigeria (ATCON), officials from the Ministries of Communications and Digital Economy, and Information and Culture, as well as collaborating agencies in both Ministries. The Chairman of NCC Board of Commissioners, Prof. Adeolu Akande also led his colleagues on the Board to the forum which was attended by many other professionals from all walks of life, who gathered to make necessary inputs towards finalising the draft TVWS Guidelines.

The TVWS is the unused broadcasting spectrum which can be deployed to provide affordable broadband services to people at the grassroots.

Addressing the audience at the forum, Pantami said the TVWS Guidelines is in sync with the objective of the National Digital Economy Policy and Strategy (NDEPS) unveiled by President Muhammadu Buhari in November last year.

The Minister noted that TVWS issue came up “as a result of a resolution by the National Frequency Management Council (NFMC) in which NCC and National Broadcasting Commission (NBC) were urged to work together by setting up an inter-agency committee that will ensure the deployment and usage of the spectrum for TVWS.”

Dr. Pantami stated that TVWS is domiciled with NBC and can be used in bringing affordable broadband services to unserved and under-served areas and that it is part of the mandate of NCC to ensure universal access to telecoms services.

“It is because of this that NFMC urged both to work together for the effective utilisation of TVWS, which also supports the expanded mandate of the Ministry towards advancing government's vision of promoting digital economy. In fact, the framework directly addresses two of the eight pillars of NDEPS, which are pillar one and three focusing on developmental regulations, and solid infrastructure, which has broadband access as a central component,” he said.

Pantami commended the efforts of NCC and NBC for complying with the rule-making process by organising the stakeholder forum to take inputs before finalising work on the TVWS regulations.

The Minister, however, charged the regulator “not to go to sleep” in constantly developing subsidiary regulations as may be necessary, in view of the fast-paced advancement in the global ICT industry.

Prof. Adeolu Akande, Chairman, Board of Commissioners, who commended the Honourable Minister for his support, said the Board of NCC will continue to provide necessary policy directions to the Commission for effective regulations of the telecoms industry.

He stated further that countries such as the United States of America, Singapore, United Kingdom, Canada, Kenya, Namibia and South Africa, have made significant progress towards the optimisation, utilisation and regulation of TVWS, and Nigeria will do so too. He promised that the Board will support the NCC in ensuring that Nigeria is counted on the list of such countries.

Earlier, Prof. Umar Garba Danbatta, Executive Vice Chairman and Chief Executive Officer of NCC, told the stakeholders that the forum was organised specifically to discuss the use of TVWS at finalising the draft Guidelines on the deployment of this technology, in line with the Commission’s commitment towards bridging the digital divide between different strata and sectors of the society.

“A draft of the Regulatory Framework has been concluded and as usual, we have invited you all to this meeting today to present what has been a result of a whole year of hard work, collaboration and consultations, to you for your comments and feedback on the draft document. This will lead to its eventual finalisation and operationalisation,” the EVC said.