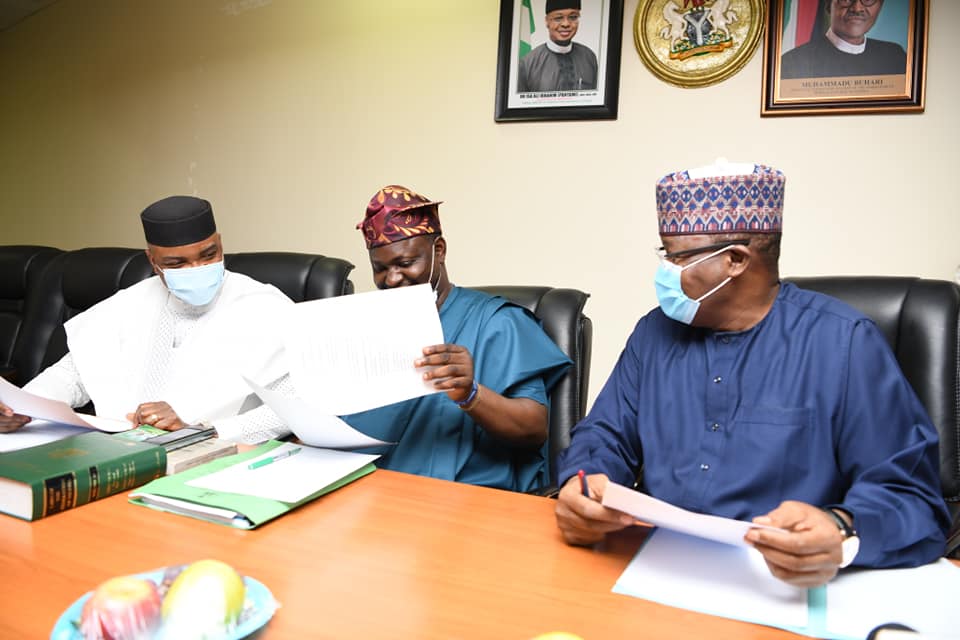 Click to view pictures.
The Executive Vice Chairman of the Nigerian Communications Commission (NCC), Prof. Umar Garba Danbatta, has told the House Committee on Telecommunications how the telecoms agency contributed to the revenue drive of the Federal Government by generating and remitting N344.71 billion to the Consolidated Revenue Fund (CRF) in the last five years.

Danbatta stated this while briefing the Committee members, led by their Chairman, Hon. (Prince) Akeem Adeyemi, during a legislative oversight function on the Commission in Abuja on Wednesday, October 28, 2020.

The EVC, who attributed the successes of the Commission in the last five years to the harmonious relationship between the Commission and the National Assembly, said such relationship, the diligent oversight by the lawmakers and necessary legislative support have brought forth a lot of dividends for the industry.

“Through the support of the lawmakers, especially the House of Representatives Committee on Telecommunications, which the NCC leadership has worked with in the last five years, the Commission has been able to generate and remit N344.71 billion to Federal Government Consolidated Revenue Fund (CRF) from spectrum fees and operating surplus,” he said.

Danbatta stated that telecoms sector’s contribution to Gross Domestic Product (GDP) increased from 8.5 percent in 2015 to 14.30 percent as of the second quarter of 2020. In financial value, the 14.30 per cent translates to N2.272 trillion in Q2. He also said that telecoms investment grew from around $38 billion in 2015 to over $70 billion currently.

According to him, through the collaboration of critical stakeholders as the National Assembly, the NCC has been able to increase broadband penetration from 6 percent in 2015 to 45.43 per cent as of September, 2020 while basic active internet subscription grew from 90 million to 143.7 million.

“Between 2015 and September, 2020, active voice subscription has increased from 151 million to 205.25 million with a teledensity standing at 107.53 percent as at end of September, 2020. We are also empowering and protecting the consumers and ensuring we are able to sanitise the industry of improperly-registered Subscriber identification Module (SIM) cards through our impartial regulatory approach,” Danbatta said.

To continue to collaboratively advance the development of the industry, Danbatta listed key areas of collaboration with the House Committee, going forward. These, according to the EVC, include speedy passage of the Commission’s budget, enhancing mutual working relationship and knowledge transfer sessions/capacity building for Committee members for better understanding of the workings of the Commission and the industry.

Meanwhile, Hon. Adeyemi, in his address, said the over sight function was in line with relevant sections of the Nigerian 1999 Constitution, as amended, which empowers the House to carry out its role of checks and balances on the executive arm of government under which the NCC, as a Federal agency, falls.

The committee commended the leadership of the Commission for its transparency in ensuring remittances to CRF of the Federal Government, considering the current revenue drive of the government.

The committee urged the NCC to sustain its current template of ensuring effective regulation of the telecoms sector in a manner that would be more mutually beneficial to the industry players, the consumers of the telecoms services and to the Nigerian government.