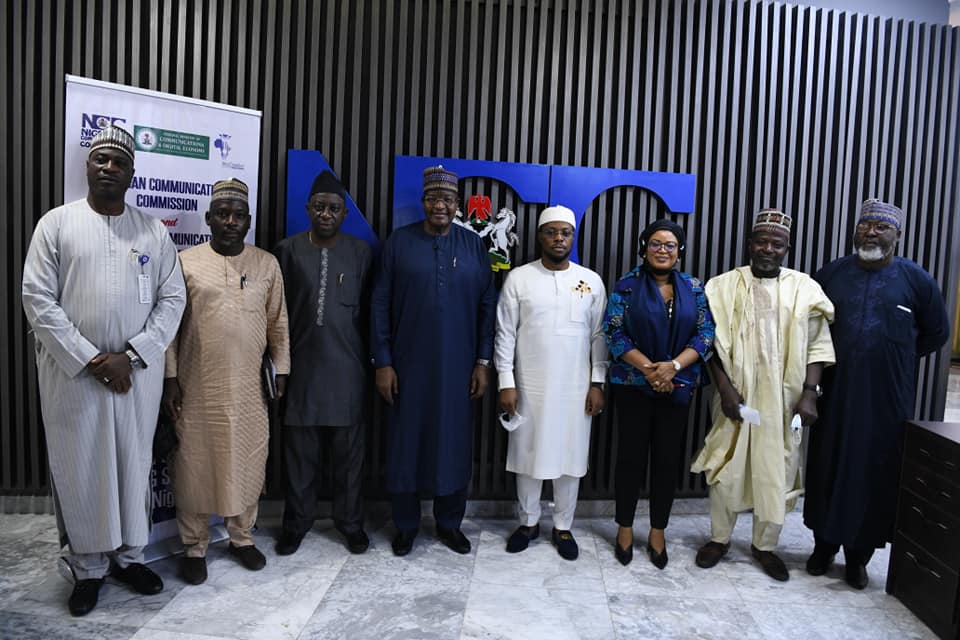 Click to view pictures.
The Nigerian Communications Commission (NCC) and Nigerian Communications Satellite (NigComSat) have signed a Memorandum of Understanding (MoU) that will facilitate the release of contiguous bandwidth in one of the most suitable frequency spectrum bands for early deployment of fifth Generation (5G) Network services in Nigeria.

The MoU signing ceremony was the high point of discussions by the two organisations on how to relocate the NG-1R satellite of NigComSat to the standard C-band 300MHz (3.9GHz – 4.2GHz) portion of the band, which is considered more suitable in terms of satellite service offering because of the advantage of cheaper terminal devices for end users.

Accordingly, such relocation will leave the non-standard C-band 400MHz (3.5GHz – 3.9GHz) portion of the band for 5G use while the cost of relocating the NG-1R is expected to be offset from the proceeds of the auction of the 5G spectrum.

Speaking at the epoch-making event at the Commission’s office in Abuja on Wednesday, May 5, 2021, the Executive Vice Chairman of NCC, Prof. Umar Garba Danbatta, appreciated the leadership of NigComSat “for demonstrating that the interest of our dear country is paramount to our organisational or personal interest”

According to him, the Commission initiated negotiations with NigComSat to make some adjustment to its satellite operation and release part of its spectrum holding in the band to facilitate the deployment of 5G in Nigeria.

“Among the Frequency Spectrum bands used for 5G, the C-band (3.4GHz - 3.9GHz) stands out because its balancing point between coverage and capacity provides the perfect environment for 5G connectivity. The C-band is most suitable and appropriate for immediate deployment of 5G services taking into consideration availability of device ecosystem with 60-70 per cent of global commercial 5G network deployment currently in the band, thus the importance of this Spectrum for early deployment of 5G services in Nigeria cannot be over emphasized.

Danbatta, while stating that the MoU will go a long way in making positive impact on the Nigerian economy, also said it will offer a new chapter of cooperation, collaborations and mutual assistance that will further spur the growth of the telecommunications ecosystem in the country.

In her remarks, the Managing Director of NigComSat, Dr. Abimbola Alale, said her organisation was happy about the collaboration, which will ensure a win-win relationship between both agencies of government as well as benefit the government in its drive to facilitate the development of Nigeria’s digital ecosystem.

“We are happy with this agreement; the Commission has assured us of a win-win engagement which signals a major step towards the development of the Federal Government’s digital economy drive,” she said.

Earlier, the Chairman, Board of Commissioners, NCC, Prof. Adeolu Akande, who was represented by a Board member, Chief Uche Onwude, commended the two agencies for taking a bold step in the right direction to release contagious quantum of spectrum in the 3.5GHz band for early deployment of 5G.

According to Akande, “this type of collaboration is commendable as it ensures synergy amongst agencies under the Federal Ministry of Communication and Digital Economy and will consequently foster the deployment of 5G and enable Nigeria to tap its full potential like other advanced countries which have deployed 5G technology on a full commercial scale.”

The epoch-making event was attended by Board members and senior management staff of the two organisations.