"There is Enormous Potential for Growth and Investment in Nigeria" - Professor Umar Danbatta, the Executive Vice Chairman of the Nigerian Communications Commission says as AFRINIC-27 opens in Lagos. Danbatta has said that the earmarking of slots in the 700MHz band for commercial broadband deployment; the re-planning and licensing of the 800MHz, and the 900MHz E-GSM  bands for 4G/LTE services; the opening of the 70/80GHz to facilitate broadband deployment; the licensing of the 2.3GHz for 4G/LTE deployment; and the authorization given some Mobile Network Operators to re-farm the 1800MHz for 4G/LTE deployment speak to the opportunities for growth and investment in the Nigerian telecommunication sector. 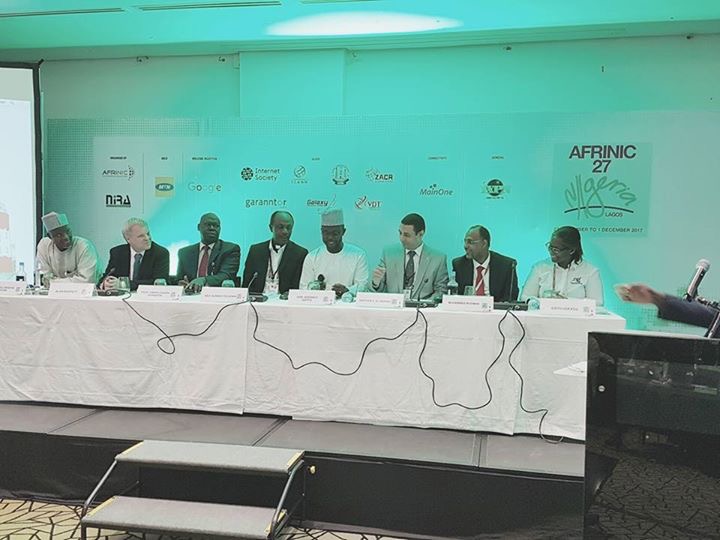 Click to view pictures.
Danbatta stated this earlier today at the Renaissance Hotel, Ikeja Lagos through Alhassan Haru, NCC's Director of New Media and Information Security who represented him at the 27th Conference of the African Network Information Centre for Africa and Indian Ocean (AFRINIC-27).

The foregoing according to Danbatta demonstrates in a concrete sense NCC's commitment to the implementation of its Strategic Vision Plan 2015-2020 as derived from the 8-Point Agenda, which first item is the Facilitation of Broadband Penetration. The EVC said emphatically that the basis for such envisioning is oriented in the established correlation between broadband utilization and job creation, economic growth as well as global competitiveness.

Speaking to the theme of the biannual forum - Taking the African Internet to the Next Level Through Policy, Collaboration and Education - the CEO of NCC urged all stakeholders to evolve sustainable policies and forge greater collaboration to achieve optimal utilization of the resources of the Internet.

In addition, Professor Danbatta said the challenge posed by cybercrime also require collaboration of all stakeholders in the ICT ecosystem. This explains why "NCC is partnering ITU to set up the Africa Regional Cybersecurity Centre in Abuja to enhance information sharing and capacity building on cybersecurity issues in the African region". He therefore commended AFRINIC for its spectacular achievements in rallying stakeholders together to provide the widest possible use of Internet resources by all interested communities.

Similarly, Nigerian Communications Minister, Honourable Adebayo Shittu, who was represented at the event by Tope Fashedemi, the Director of e-Governance at the Ministry of Communications, praised AFRINIC for providing the leadership that has contributed to the positive accomplishments in the Africa ICT ecosystem.

Shittu informed the delegates that Nigeria's Internet penetration is already at 47.44 percent and noted that the figure is set to rise as NCC finalise processes for the licensing of companies to fill the infrastructure  gap and open the floodgate for citizens and enterprises to access Internet resources.

The Minister's position is in congruence with the remark of Dr. Isa Ali Pantami, Director General of NITDA, who was represented by Dr. Abdullahi Usman. Pantami stated that broadband penetration is adding profound change in many spheres including citizens participation in governance. He promised that NITDA will work with the Federal Ministry of Communications, NCC, NIRA and other stakeholders to promote sustainability, governance and inclusion for all.

Other speakers at the forum include Rev. Sunday Afolayan, Chairman of the Board of AFRINIC, who is also the President of Nigerian Internet Registration Association (NIRA) - the local host of AFRINIC-27. Afolayan who spoke through his deputies on the  Board of AFRINIC, and NIRA - Haitham El Nakhal and Muhammed Rudman respectively, said AFRINIC has grown from managing numbering resources to championing Internet penetration on the Continent.

Also, Alan Barrett, CEO of AFRINIC, said to the forum that the Centre has over 100 million IPV4 addresses and over 9000 IPV6 prefixes; has trained 550 engineers in some 18 countries in Africa; and continued to ensure that the Internet remains improved for all users in the region.

Edith Udeagu, the Chief Operating Officer of NIRA who thanked the participants - many of who are from other countries in Africa and the Indian Ocean nations of Mauritius and Madagascar - for their presence and support, urged them to look forward to robust technical presentations and panel discussions at the one week conference.

All the presentations at the Conference are transcribed on the screen and are being translated into English and French.

AFRINIC, which head office is in Mauritius, is the regional Internet registry for Africa and the Indian Ocean, and it encourages end users to approach it to obtain IP addresses for services deployment and to engage in discussions for appropriate policy formulation on Internet resource utilization.