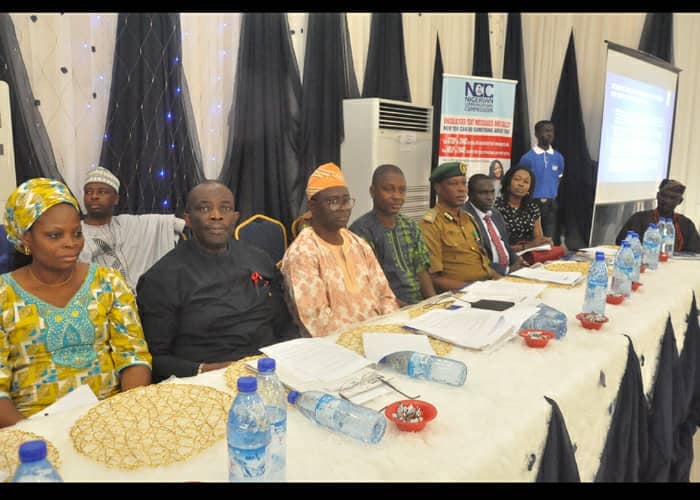 The Nigerian Communications Commission (NCC) has remained upbeat in its commitment to sensitise telecom consumers across the country on the dangers of cybercrime and the need for them to be more conscious of the threats in the cyberspace when carrying out financial transactions or any other activity online.

The foregoing was demonstrated during the 109th edition of the monthly Consumer Outreach Programme (COP) held in Osogbo, Osun State which focused on how the telecom consumers can mitigate effects of cybercrimes.

The Commission charged telecom consumers to always use strong and secure passwords for their Internet-based accounts and online transactions.
"The use of strong and secure passwords for online transactions would make it difficult for cybercriminals to hack into online accounts of Internet users and we encourage telecom users to be wary of the various antics of cybercrimnals," Felicia Onwuegbuchulam, Director, Consumer Affairs Bureau, NCC counseled at the Outreach held on Thursday, September 5, 2019.

Represented by Jerry Ugwu, Deputy Director, Consumer Affairs Bureau, NCC, Onwuegbuchulam stated that as the Commission embarks on various initiatives for Nigerians to have increased access to broadband for positive engagements, it was also aware of the wrong use of such access for negative purposes by some individuals.
It is based on this realisation that the Commission has devoted some of its outreach programme to sensitising telecom consumers on dangers of cybercrime as well as the obligation of the consumers in online protection.
According to Onwuegbuchulam, the Commission will continue to engage telecom consumers on the effects of cybercrime through enlightenment and awareness programmes such as the COP.

The Director of Consumer Affairs then affirmed that consumers who take online protection must take NCC programmes and outreach seriously because of the opportunity the programmes offer for learning.
Also at the forum, Ismail Adedigba, Head, Information and Reference at Consumer Affairs Bureau of NCC, stated that as the demand for data services and Internet activity increases, with most services especially commerce and other banking activities going online, Internet users have become targets for hackers.

This explains why NCC considers it necessary "to commit resources into continuously educating telecom consumers on the dangers and forms of cybercrimes as well as empower them with the knowledge they need to be able to discern and identify cybercrime antics, in their various guises, when they confront any online and, more importantly, what they should do personally to get protected" he said.

Indeed, the current statistics reveals a rise in Internet use among Nigerians and therefore underscores the programmes initiated by NCC on cybersecurity awareness.
As an illustration, in July 2019, the total number of Internet users rose to 122.6 million from 122.2 million in June while broadband penetration grew to 33.72 percent from 33.31 in June.